This weekend was the weekend of the hardcore at BRC with awesome performances over variance long distances.

After hours of relentless training following his superb marathon earlier this year PB Steve competed in The Long Course weekend in Wales, a triathlon, spread over a 3 day period. Day one was the 2.4mile Swim, Steve entered the water with 2000 other swimmers, which for those who have seen his post on Facebook was a sight to behold, and finished in 1hr 42 minutes. On Day 2 there was just a hilly 112m Bike ride to contend with which Steve finished in 8 hours 45. Finally, on Sunday Steve completed the marathon distance run in a fantastic time after 3 tough days of 4hrs 2 minutes resulting in a combined time of 14.30.32. A brilliant performance that he should be proud of. 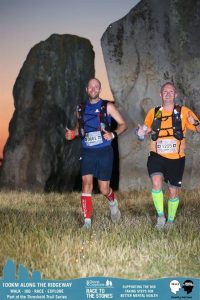 Steve Kjar ran the Race To The Stones, a 100k event in the North Wessex Downs finishing between the towering stones of Avebury. Steve finished the event in 14 hours 18 minutes, putting him in a more than impressive 188th out of 895 finishers 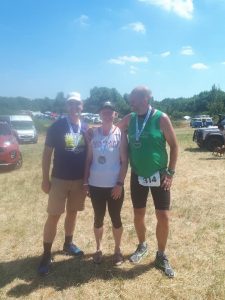 Harp was obviously not enough for Anne as her and Paul competed in the Spitfire Scramble this weekend, a 24-hour multi-terrain relay race. Each lap is 5.75 miles and Ann & Paul were joined by Mike Jordan completing the ‘Essex Bombers’ . Not to be defeated by being a team member down due to injury and Paul also nursing a hamstring injury, they racked up a fantastic 15 laps of the course, over 86 miles. 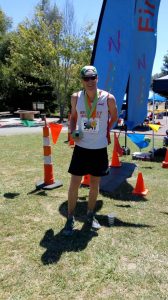 Graham Booty wins the award for travelling the furthest for a race running a trail marathon in sunny California. The event in Lake Chabot Regional Park, Castro Valley, CA consisted of a number of distances from 5 miles to 50k. Graham played the event down but put in a fantastic performance to finish 1st in the marathon distance race in 3 hours 34, over 25 minutes ahead of the next competitor