BRC’s weekend of racing got under way on Saturday morning this week with Sam & Brian Venton taking on the Ferndown 5km in Dorset. The 26th county in Sam’s challenge to run a race in every county resulted in Brian finishing in 3rd place overall with a trophy to show for his efforts. 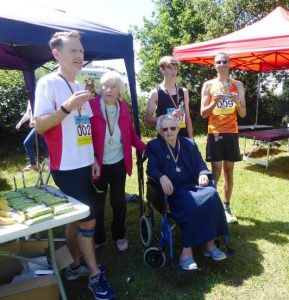 Also on Saturday we had Sean Allison tackling the Race To The King ultra which is a mere 53.5 mile jaunt across the South Downs Way, finishing at Winchester Cathedral. Sean completed the course in an excellent 13 hours & 44 minutes to finish in 69th position. 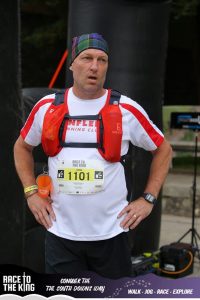 Back in Essex, BRC had 2 teams competing in the Harp 24 hour relay. Starting at noon, the imaginatively named ‘Tight Butts and Sweaty Nuts’ consisting of Ciaran Byrne, Hannah-rose Watson, Damien Harvey, Ange Hall, Shelley Taylor, Barry Key, Stephen Burton & co-chairman Graham Douglass, between them managed an impressive 42 laps to finish 2nd in their category. Also representing the red & whites were ‘Pass The Chocolate’ aka Duncan Holland, Ann Reed, Paul Reed, Manuela Gordea & Roo Hall who ran a very respectable 32 laps between just the 5 of them to finish 4th in their team category.
Sadly Tim Tomlins who was attempting the race solo had to pull out after 5 laps (21 miles) due to a calf strain. We wish you a speedy recovery Tim.

Mandy Cooper, Eddy Cooper & Annette Johnson also took part in a other teams so well done to you three plus all the other Harp’ers. I’m sure your legs will recover fairly quickly and flights of stairs will be less of an issue by the end of the week!

Finally on Sunday morning at 5.30am, Sam & Brian both sped round the Southampton Airport Runway 5km making the most of the flat tarmac terrain to notch up county number 27 in Hampshire. Just 21 more counties to go! This was also Sam’s 1,700 consecutive day of running at least one mile – an amazing achievement 👏

24 hours in the life of BRC

Following a relatively quiet weekend last week BRC were back to their best again! Our biggest contingency was at the tough, draining Harp 24. This yearly event held in Rochford is a 24-hour race where […]