In the seniors only 4 (Fem) or 6 (Male) count to the total score but it is important to have as many people from the club running as you can affect the points other clubs score even if you are not a Benfleet scorer. It is also great fun and good training often rewarded by homemade cake at the end!

Below are the Team results from the 1st race at Horsheath

We had 6 men running so all counted towards Benfleet’s score, George Watts was 1st home for Benfleet in an impressive 31.32 a full second ahead of Terry Spooner! Next was Andy Low in 31.46 followed by Michael Feltham 32.47, Nick Rankin with an remarkable  sprint finish at 34.12 and continuing his strong battle back from injury Steve Burton at 41.09 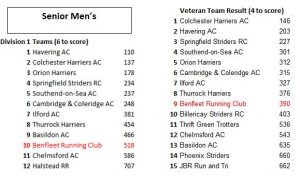 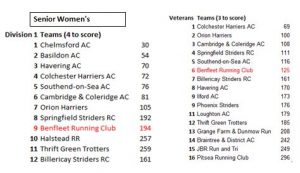 In the Under 17/20 women Victoria Hiscock continued her impressive form with a 4thplace out of 41 runners and a 1st in the under 20 women’s, and qualified to represent Essex in the SEAA inter-counties xc on the 9th December, next was  Abbi-May Walters in 32nd.

In the Under 17 men we had Charlie Sullivan in his 1st Essex league coming in 19th from 37.