Well another exciting week at Benfleet Running club. The reds and whites was flying in all parts of the world.

1st race of the week started on Wednesday when Ian, Ciaran, Chris, Manuela, Sarah and Terry taking part in the monthly crown to crown 5k event that took in the views of the undulating course through Westley Heights country park.

On Thursday night Richard Leigh competed in the final race of the Maldon 5k handicap series, 5 races across a number of weeks where your score points for how much you improve. Despite being in 2nd place going into the final run ad achieving a 5k PB on the night he was pipped at the post for the medals and came in 4th!

Next is our yearly banter handicapped race against the local rival running club Leigh on Sea Striders, where a flurry of reds, whites and blue raced a 4 and half miler and painted Hadleigh Downs from Benfleet to Leigh. you was set off with regards to your pb 5k time. This is a bit of fun between the two clubs and is a lot of fun, we then collated all the information at the local pub where Michael Bebbington won for the mens team (brc) and Sarah De (brc) won for the ladies team and and over Benfleet Running club smashed it for the 2nd year running. Thank you to LOSS for taking part and we shall see you next year.

Next came our ultra runners Mandy Cooper and Barry Keys took part in The Race to the Stones this is a 100km that takes the views from Lewknor to Avebury and went along the oldest path in Britain, The Ridgeway, and finish at the iconic Avebury Stone Circle 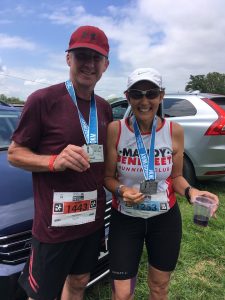 Then Keith luxon who completed Essex 30 this consisted of 4 Loops ( total of 32.8 miles) along a flat disused old railway line which is now a country park called the Flitch Way in a brilliant time of 5.22.

Graham booty completed a ultra marathon in the beautiful place of Laugavegur which is situated in Iceland in a smashing time of 6 hours and 23 mins. This trail is located in the southern highlands of Iceland and connects the nature reserves Landmannalaugar and Thorsmork. The course is 55 km and takes runners through areas of outstanding natural beauty it is a very hilly course 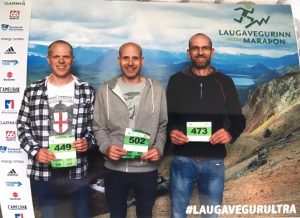 Next Tim Tomlins completed a local Triathlon through Grays which was a sprint triathlon. He completed a 437 yard swim in 8 mins then went on a 12.27 mile bike ride which he completed that part of the leg in just over 36 minutes. Finally Tim smashed out a 3.11 run in just under 21 mins. Ranking in place Tim was 15th over all, 3rd age category and got first Triathlon Trophy. Well done on your triumph.

Next we has 2 teams doing the Spitfire Scramble another local 24 hour relay run around hornchurch country park which was a former airfield base during ww2 . This is a 5.6 mile course and you do as many laps as you can in 24 hours.
Steve kjar and his friend Chris did a duo team called Legs miserables and smashed out a total of 16 laps between the duo.
Then we had a mixed team of 3-5 called the Fun Guys Andrew, Nicky, Paul and Ann completed 13 laps between them which was a an amazing achievement between them. We had Duncan also come along for a few laps of support for the ladies ty for your help.

Finale to the racing week and what a way to finish Chris Wayman did the Sri Chimoy 5k around Battersea park on Monday evening in a breath taking 16.24 knocking a massive 12 secs off the club previous record making this the fastest 5k for the club which was set in 2013 and hasn’t been beaten since. Awesome achievement Chris congratulations!!

Well done to all the reds and whites that flew the Benfleet flag for us as always you did us proud.

Remember “Crossing the starting line may be an act of courage, but crossing the finish line is an act of faith. Faith is what keeps us going when nothing else will. Faith is the emotion that will give you victory over your past, the demons in your soul, and all of those voices that tell you what you can and cannot do and can and cannot be.”