The weekend kicked off with Susan Horton and Brad Evans competing at the Eastern Masters Athletic Club (EMAC) Outdoors Track and Field Championships at Garons Park. Susan leapt to gold in her age category with 2.89m in the long jump and dodged the storms to clock 17.8 in the 100m. Brad ran 14.1 in the 100m, 29.9 in the 200m taking 2nd place in his age category for both runs, as well as 3rd place in the discus with a throw of 18.84m. Well done Susan and Brad. 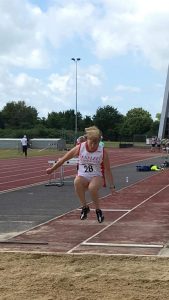 Sunday saw seven BRC runners take part in the Felsted 10k with James Caldon first man home in 4th place overall clocking an impressive 34:10. Damien Harvey followed in 14th place in 36:34,with Ian Caldwell and Lee Allen running 51:40 and 58:46 respectively. The ladies saw Sarah Grabowski Sj Grabs first home in 45:11, Nicola Evans finished in 48:57 and a huge congratulations to Ann Reed for running her first (but not last) sub 50 min 10k, in a time of 49:52.

Meanwhile over in Rayleigh, the 8th Kirste 5 Memorial Race was well underway. The race was set up in 2012 in memory of former BRC member and charity fundraiser Kirste Bowman and is a picturesque run through Hockley Woods, Cherry Orchard and Grove Woods. Seven BRC runners took part here with Eddy Cooper first man home in 33:02 followed closely by Ciaran Doherty in 33:17 coming in 6th and 7th place overall respectively. 3rd man home was Michael Waters in 39:55. The ladies contingent saw Ange Hall returning in 43:49, Sarah De in 45:17, Hannah Mickleburgh-Gardh in 55:13 and Vivi Willett in 1:24:29. Well done all.

Over in London, Paul Daly, Georgia Brown and Lynn Carter ran the ASICS London 10k (formerly the British 10k). This is a race which takes in some of London’s most famous landmarks including Big Ben, Trafalgar Square, St James’ Palace, Westminster Bridge and Parliament Square, all to the accompaniment of live bands and DJs along the route making for a festival atmosphere. Georgia was first home in 51:42, Paul clocked 53:19 and Lynn ran 1:28:48. Sounds like a great event, and well done to our runners.

Sean Allison was the BRC representative at the Ice Cream Sundae event in Brightlingsea organised by Hare and Tortoise Running Ltd. Runners were invited to complete as few or as many laps of the 10.54k traffic-free, trail route along the Colne Estuary as they wished, within a time limit of 6 hours. Congratulations to Sean who completed his lap in 1:03:52.

Finally, British Athletics in partnership with BBC Sport invited women to take part in the C25k event at the Muller Anniversary Games at the London Stadium as part of the BBC’s “Get Inspired” initiative. Manuela Gordea completed her 5k in 31:56 with world class athletes cheering her and her fellow runners along!

A great weekend of running coupled with a big turnout at Hadleigh Parkrun. Well done BRC.