A relatively quiet racing weekend this August Bank Holiday, which was the hottest one since records began. Whilst many BRC members were sunning themselves on holiday or at home having BBQs, we had a handful of “mad dogs and Englishmen” out racing in the heat.

First up on Saturday was James Caldon, competing in the Double or Quit Race, an annual multi-terrain 5,10 or 15 mile race around Shipley Park in Derbyshire. With a pretty unique premise, athletes can run 1, 2 or 3 laps of the 5 mile course, having the option to go out on a third lap as long as they have completed the first two in at least 1hr 25mins. James Caldon won the event, competing three laps in an unofficial time of 1.35.16. Fabulous work, well done James! 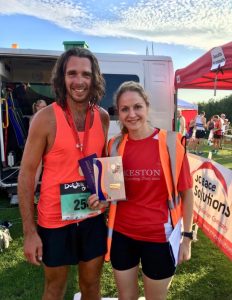 Saturday also saw our resident ultra-runner Steve Kjar take on the Ridgeway Challenge. A continuous 86 mile trail from Ivinghoe Beacon to Avebury Stone circle on a 5000 year old trackway; this event had 1929m ascent and 1991m descent. An awesome feat by anyone’s standards, but when you add in the temperatures recorded this weekend, it becomes truly remarkable. Steve completed this event in 21hours 37 minutes, coming 32ndoverall and 4thin his age group. First class Steve, well done!

Sunday saw two of our running married couples competing at the Mersea Island 5 and 10 mile road race, a two-lap course which benefited from beautiful sea views. Richard Leigh and Samantha Venton completed the 5 mile event, while Nikki Leigh and Brian Venton completed the 10 mile event, after running with their spouses for the first lap. No PBs today, but all great training runs for upcoming events. Great running guys! 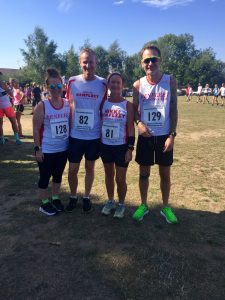 Bank Holiday Monday saw Graham Douglass competing at the Canterbury Half Marathon in Kent, a challenging course set on the quiet lanes on the outskirts of the city. Once again we had record-breaking temperatures, but Graham came home 168th, in a time of 2.05.57. Great work Graham!

Well done all at BRC who ran this week in challenging conditions, we will reap the benefits this winter season!