We had 3 competitors at Hanningfield completing the standard distance course: 1500m swim, 36km bike & 10km run around Hanningfield Reservoir in Essex with all 3 coming in the top 15.
Graham Booty put in a fantastic performance in the swim coming out of the water in 3rd followed by Richard Jones in 28th & Pete Stalley in 34th. All change on the bike with Richard coming in 5th, Pete in 6th & Graham in 27th. With all to play for in the final run, the 3 boys finished in 7th, 8th and 9th giving Richard the 1st place for BRC 6th overall followed by Graham in 9th & Pete in 11th. 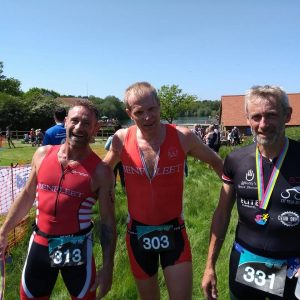 Graham & Ethan Douglass had a father son day out at the Nuclear Bunker in Brentwood, with 7k & 50+ punishing obstacles over ultra-gritty, properly muddy, farmland set in the heart of the Secret Bunker Estate. Teamwork prevailed and the boys finished in 1 hour 43 minutes & 42nd  & 43rd out of 1900 competitors. Sarah Jane Grabbers competed in the same event finishing in 2 hours 24 and coming in 359th . 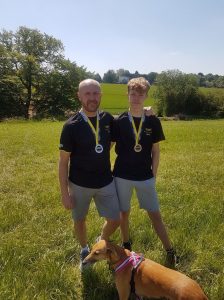 On to Sunday where we had races ranging from 5 miles to a full marathon. First, we had a great turn out at our race of the month with 25 runners, a raft of supporters & home baked cakes by Nicky Low – oh and a few prizes!

In the women’s race we had a fantastic 2nd place podium finish with Dominique Hart in 36.01 finishing 23rd overall, next some time later in 40.19 was Nikki Leigh 68th followed closely by Ange Hall in 69th & 40.31. Along with Ange fresh from last month’s marathon success, Shelly Hall came next in 75th. Fran Webster came 162nd, followed my the smiling across the line Julie Peacock (192), Bobby Oliver (200), Vicky Harvey(201), & completing the Judge family trio came Christine Judge in position 228

In a unique race we had 2 runners at Colchester Zoo 10k stampede! 1st home passed the elephants & lions was Kiera Tippett who was 75th overall but the 7th female out of 650 in 44.57, we also had Samantha Netherton who came 889th in 1.11

Once again Dan Carter was back to running a marathon after 1 week off with only a half in his 6th in 6 weeks. Dan finished the Liverpool Marathon in 3.22, slightly slower than some of his others but it was his 6th and still a time many of us would be more than happy with! He finished 176th out of 3234.