This weekends races started on Sunday with the Burnham 10k and a win for Andy Low who finished the race in 36.41 also securing him a 1st V40 – not a bad performance for somebody who spent the previous night down the pub! Also at the event was Ann Reed who with her toe on the mend managed a 58.38 in position 122 & the 29 female out of 121. 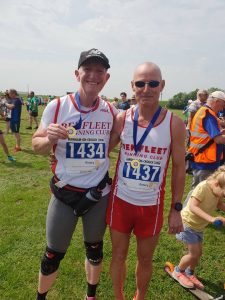 Our biggest attendance of the weekend was at the Vitality 10k where 22 BRC took to the streets of London with the likes of Sir Mo, David Weir and Jo Pavey!
Hot on Mo’s heels first home for BRC was Dan Carter in 37.10 & position 446 , 2nd was Roy Harwood with a new PB of 42.39 & just beating Ciaran Byrne in a reversal of last weeks race who came in 3rd for BRC in 43.01 & 1321 out of 14,465 runners. Graham Douglass was the next male home making a return to the streets of London with a slightly more positive run! Michael Bebbington followed, then Ian Banthorpe, Daniel Lyons & Mark Cowan. Richard Leigh was the 9th male across the line in his 1st 10k race followed by, Paul Daly then John Crisp who was out with his harem of women! (their words not mine!) & then Keith Luxon. 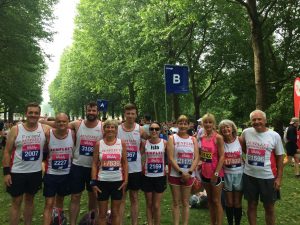 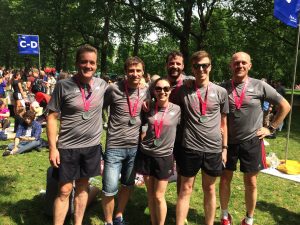 Well what a difference a week can make, last Sunday BRC battled blue skys and temperatures in the mid 20’s and this week those competing in the Rayleigh 10k faced rain, cold wet and mud! […]

Race Report 26-30th June by Debbie Robinson The sun came out to play as did BRC, taking advantage of the light evenings and variety of events available this time of year. Mens team captain, Graham […]