The sun came out to play as did BRC, taking advantage of the light evenings and variety of events available this time of year.

Also on Wednesday, Chris Wayman completed the Hercules Wimbledon 3000m, winning his group race in 9.33.63. A track event in its 2nd year. Chris followed this with the Finsbury Park Open 5000m on Friday 28th, finishing in 16.30.64, less than half a second from a PB.

Six other members also earned themselves a shandy on Friday night after competing in the Springfield Striders Friday Night 5 miler. A two lap course on quiet country lanes around Pleshey. Ciaran Bryn was the first BRC member home in 31.31, followed by Archie Conners in 32.24. Ian Pike in 33.20. Liane Fancourt in 40.14. Samantha Venton in 47.52 and ladies captain Annette Johnson in 47.53.

And then is was Saturday and we had three gentlemen testing their own endurance on what turned out to be the hottest day of the year so far.
Steve Kjar ran the Lakeland Trails 100km race in Ambleside. He finished in 19:21:58. Starting at midnight the race takes in a circuit of the central Lake District with over 11,000 feet of elevation gain. Steve said of the event “I can definitely recommend it!!” 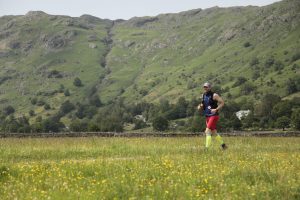 Sawbridgworth near Harlow was the place for our other two gentlemen for the ‘Runderbirds Are Go’ 5 Day event. A flat, fast off road trail route along the River Stort. Each competitor could choose to run as many laps as possible in 6 hours on each of 5 days. Each lap is 3.28ml.

Sean Allison completed the Half Marathon option in 2.10 and Keith Luxon ran 26.2ml in 3.37.
Hats off to all three of you.

‘Run the Hill’ Horndon 10k put four BRC members through their paces on Sunday. First to cross the finish from BRC was Georgia Brown in 49.59 followed by Paul Daly in 51.38 then Megan Morgan in 52.27 and Griffin Anthony in 54.18.

Graham Booty was at it again on Sunday also testing his endurance. This time he took it to ‘The North Downs 30k’. Finishing 36th out of a field of 551 in 2.29.

Massive Congratulations to all who ran.

Well what a difference a week can make, last Sunday BRC battled blue skys and temperatures in the mid 20’s and this week those competing in the Rayleigh 10k faced rain, cold wet and mud! […]

This weekends races started on Sunday with the Burnham 10k and a win for Andy Low who finished the race in 36.41 also securing him a 1st V40 – not a bad performance for somebody […]